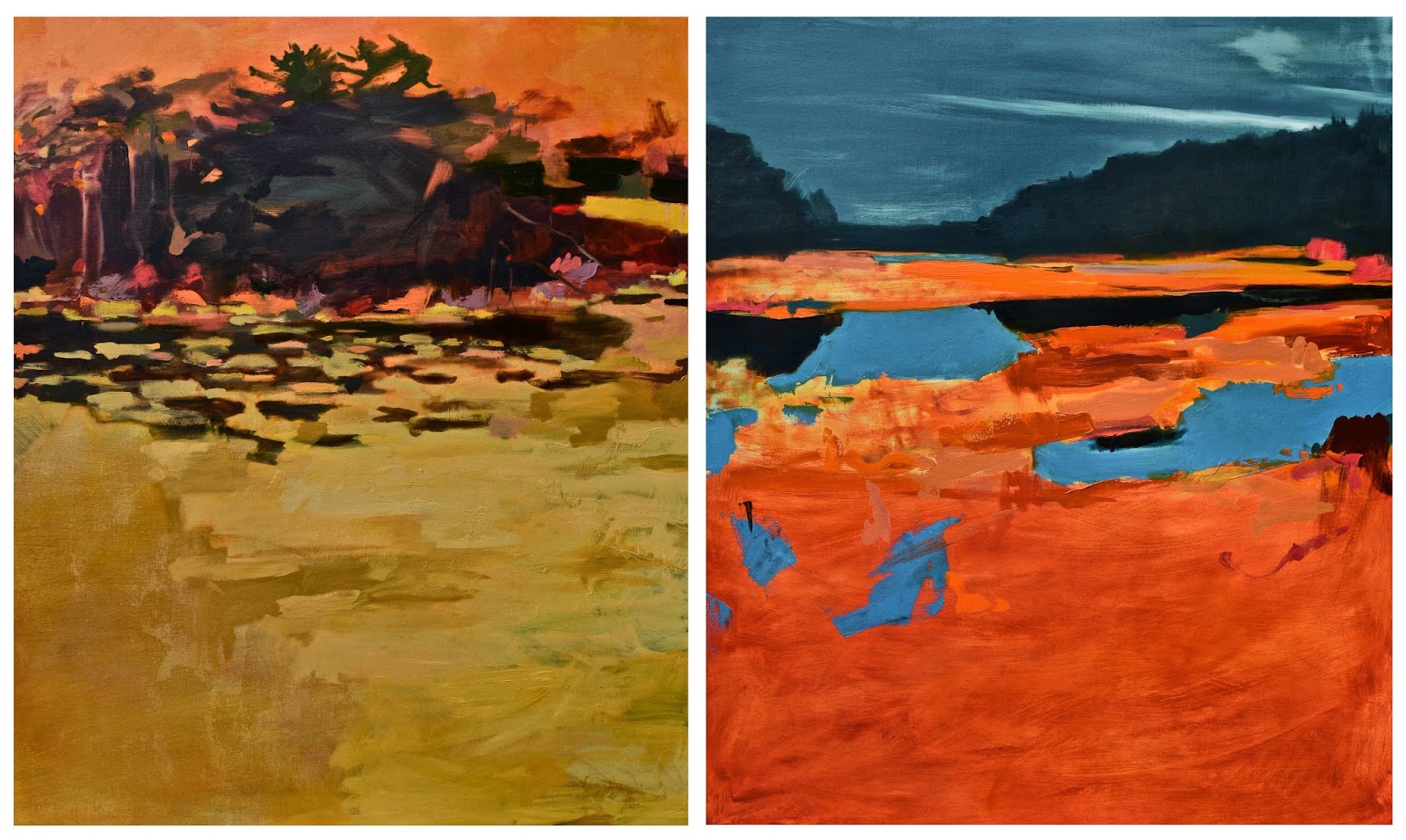 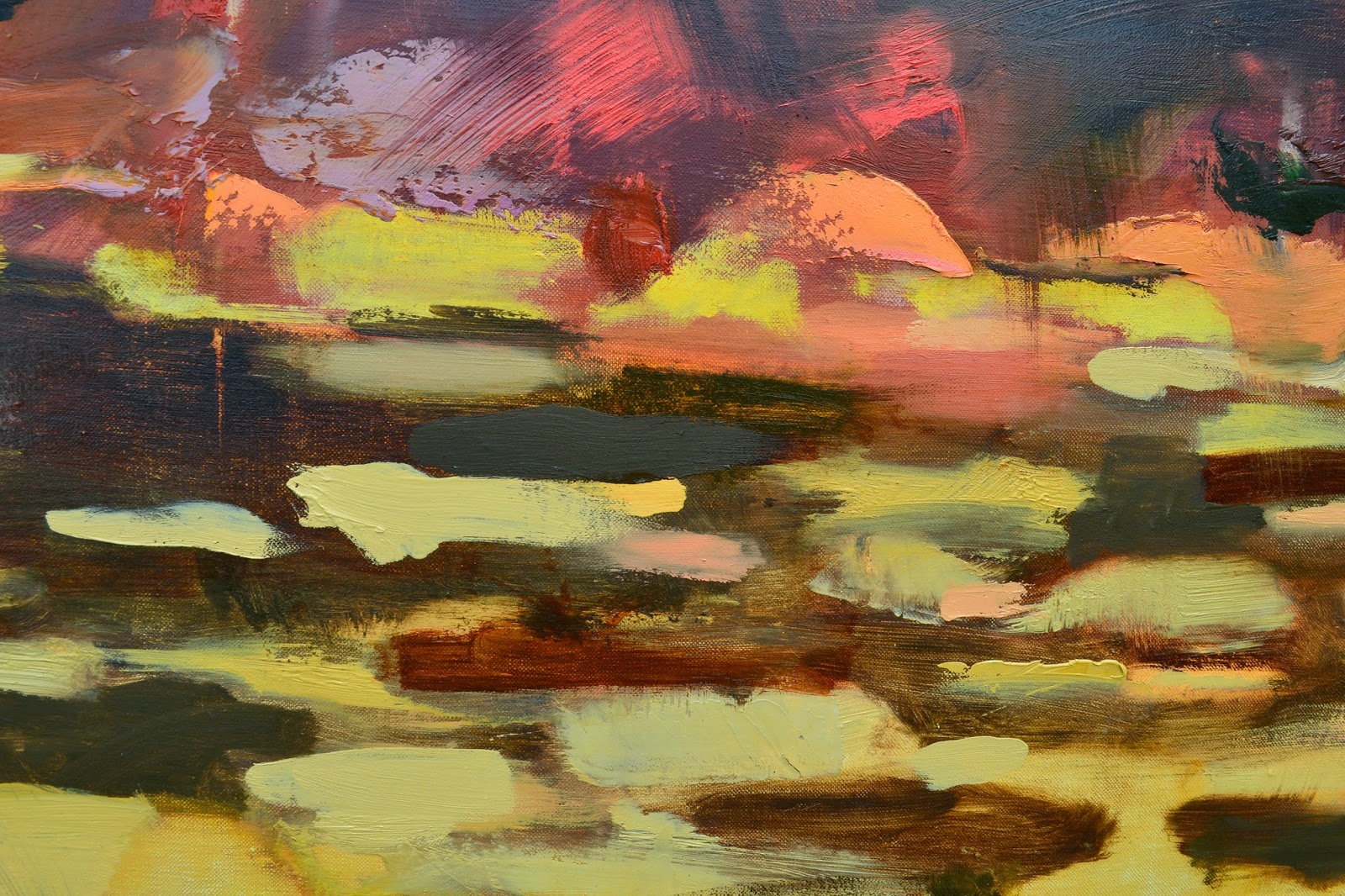 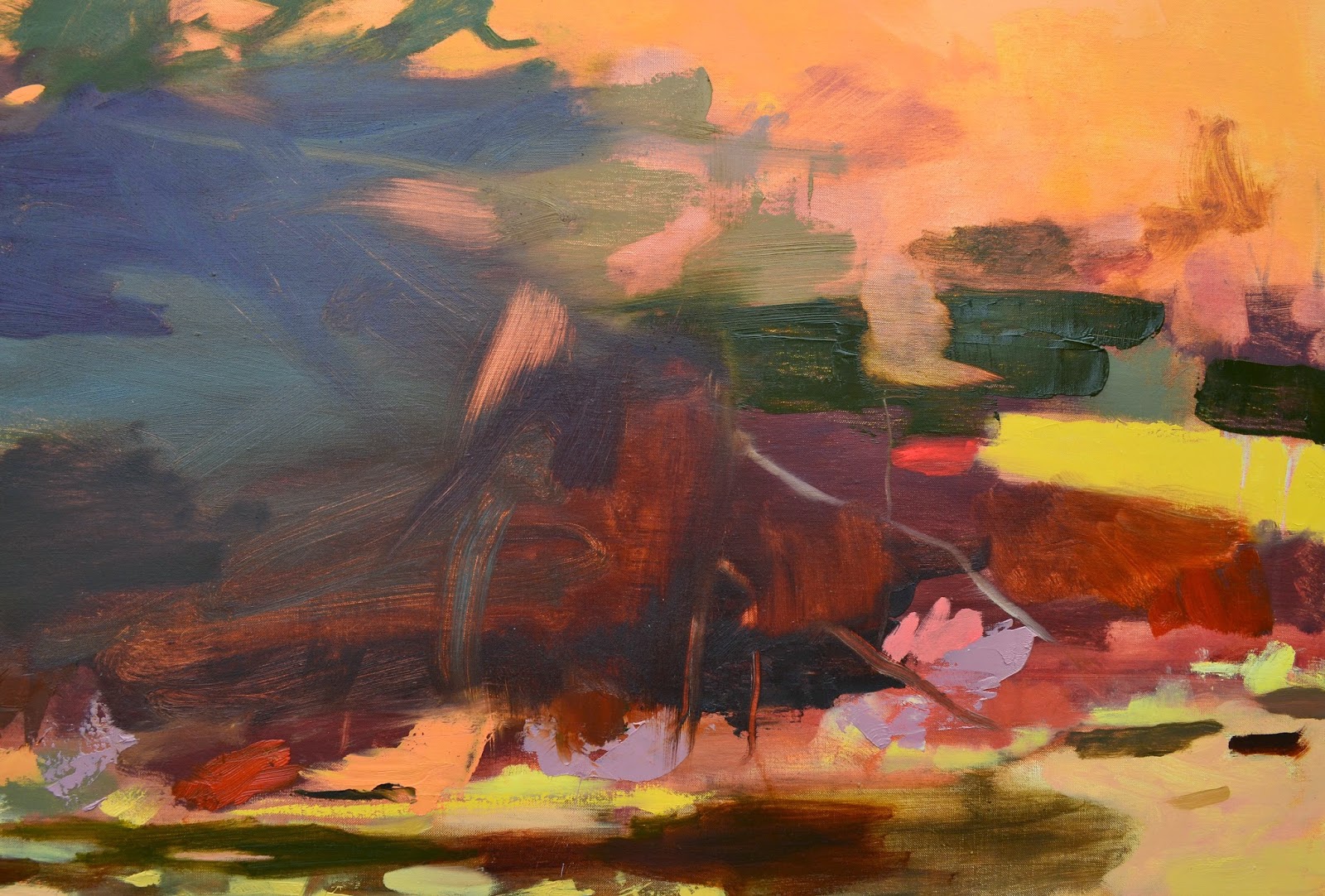 I was thinking about a lot of things while making these two paintings.  Like their installation in ideal circumstances being opposite from one another and facing each other.  I thought looking at one while knowing the other was behind you, and with the faint memory of each while looking at the other, may forgive the fact that they look nothing like the same place.  I thought of pictures of Mars, and the long poem by Hart Crane titled "The Bridge" (about Brooklyn not rural Southeastern Massachusetts.) Nonetheless these were my attempt at a long poem.  I worked hard to remove them as much I could but at the same time keep them partially referential to an actual place and time.  Being 74" x 62",  my aim was to bring the kind of musculature to them that was natural and even easy in a small painting.  This required many handmade tools, and techniques like "painting into the couch" that were new to me.  Hard time limits and reminders of the entire painting being more important than all of the nervous activity at the surface were of constant concern.  Emotional scapes that held feeling and arrest in viewing was my aim.  I painted both a 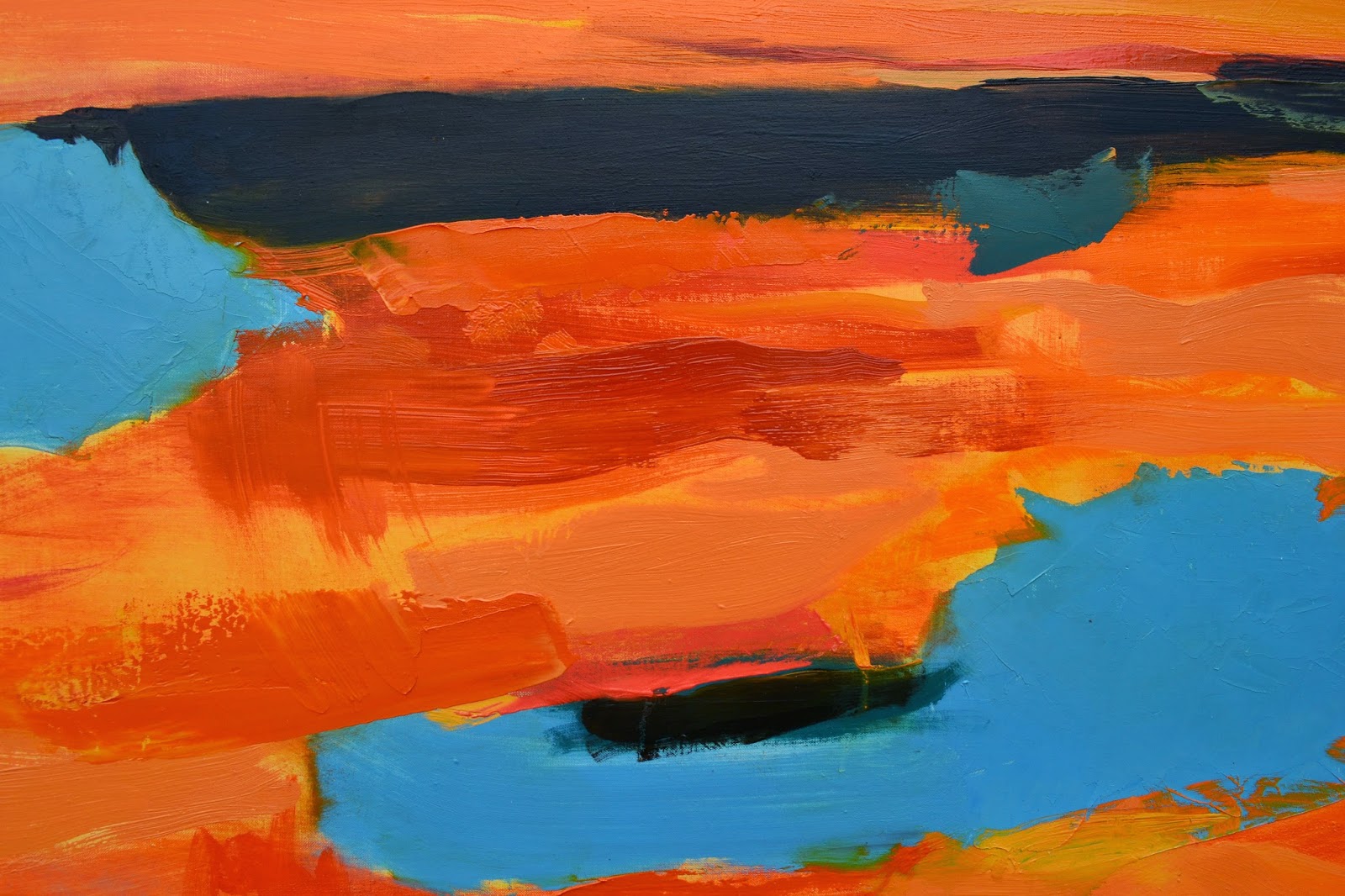 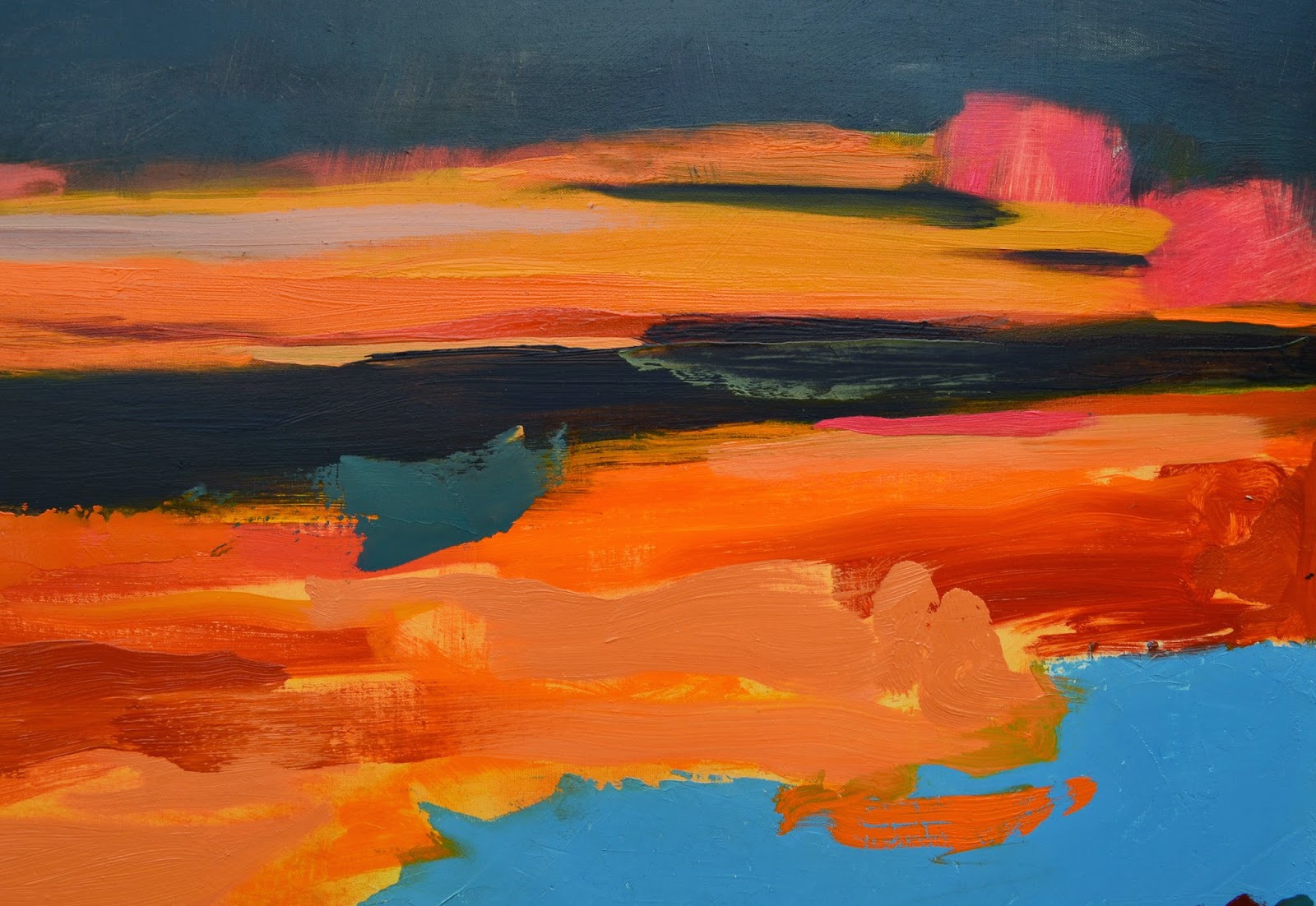 different orange on the top half and flipped one, telling myself to make it work at all costs.  I fought using green, as it was everywhere.  These would be some of the few binding components beyond size.  I tried to be less deceptive with the amount of aggression with which I like to work, and more generous with material.  A variety of surface gloss and texture, and a constant supplement of visual punctuation was on my mind.  As a diptych (due to curatorial limitations) they had a compelling visual paradox.  Two views opposite one another, now next to each other; formed a third view, one of imagination.  I made them next to each other.  The consistency of the vanishing points between them was true, and asked only that you turn your head.  A curious change in visual focus due to a difference in scrutiny of detail, and an intentional reversal of values in part gave a level of abstraction that could only be achieved through observation.  A good friend said "It makes perfect sense that these are in oil." Thanks Andrew.  This comment stays with me today.


Posted by Joseph Fontinha at 2:03 AM